All Goa Weather Updates now on Facebook at @VagariesGoa


Posting of Updates to this blog has been suspended since 2016.

All subsequent weather updates on Goa and Monsoon Analysis are done regularly on Facebook.

The South West Monsoon Season 2016 in Goa, lasting from June 1 to September 2016 was normal this year. But the monthly rainfall showed wide variation in departure from Normal (%), except in the month of September.

Following Graphs and figures give a good picture of how the monsoon season unfolded in Goa this year.

Data is from IMD, Goa Center. 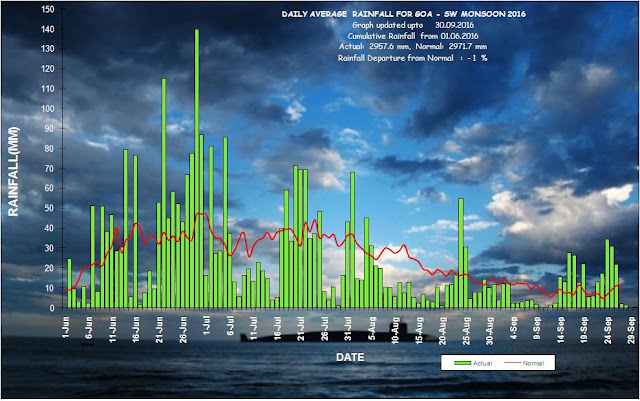 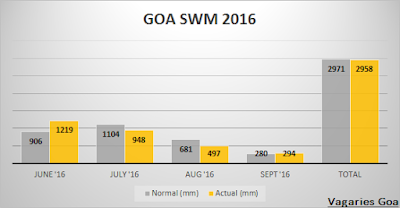 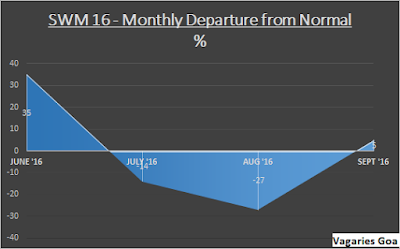 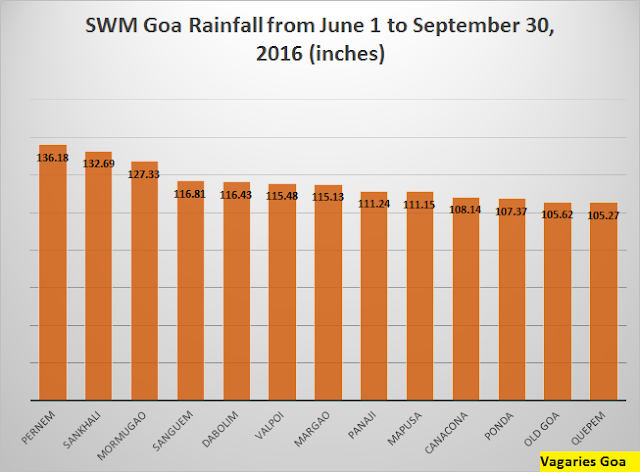 Pernem in North Goa was the surprise wettest place in Goa this year. The usual wettest place, Valpoi, at the base of Western Ghats, received poor rainfall in June and as a result finished outside top five wettest places. Mormugao and Dabolim also made surprise appearance in top 5 places, mainly on account of strong showing in June.

6) Seasonal Rainfall recorded at Major Towns on Map of Goa: 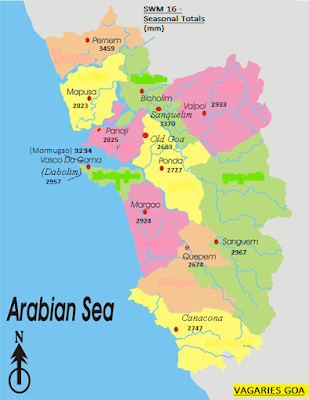 7) Comparison of 2016 Seasonal Rainfall with past Years: 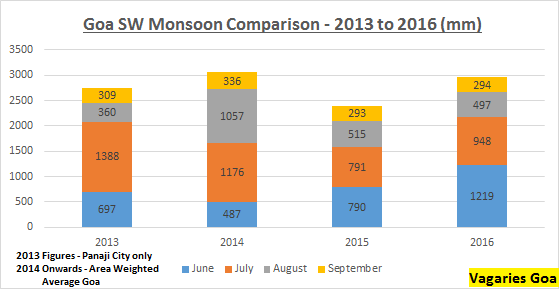 From this graph we observe that during the last 4 years, except for the month of September, there is a great variation in the monthly rainfall amount YoY. Additionally, this year July lost the honour of normally being the wettest month of the year.

According that analysis the Sub-Division of Konkan and Goa has the honour of being the wettest sub-division in the country this year.

The total All India Rainfall this year was in normal range finishing -2.87% below normal.

Though the official SW Monsoon season has ended, the withdrawal of the SW Monsoon has been limited to NW India till October 6, the date of writing this post.

Goa is expected to receive scattered light rainfall, till the monsoon withdraws completely by late second half of October.
Posted by Atul P Naik at 17:00

The SW Monsoon continued its below normal performance from July into August 2016, but to a much greater extent.

Against a normal rainfall of 681 mm in August, Goa received just 497 mm this year showing a deficiency of -27%!

The SW Monsoon in Goa has continued to remain just around normal mainly due to the 35% excess rains it received in June '16, even though July rains were -13% below normal. 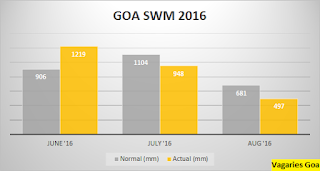 Inspite of the poor rains in August this year, the seasonal rains so far have performed better than in 2015 and 2013 and almost as good as in 2014, at this time of the year.

In the graph below, the rains for 2013 are for Panjim Center only, as IMD had not started the Average Weighted Area Rainfall for Goa that it adopted from 2014 onwards. 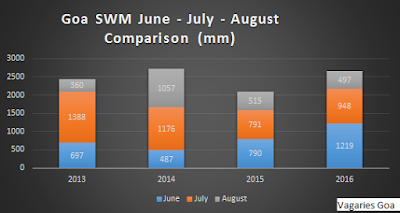 Overall in August this year there were just 6 days which had normal or above normal rains.

During August the interior areas, particularly at the base of western Ghats received heavier rainfall than coastal areas.

A number of rain centers crossed the 2500 mm and the 100 inch seasonal rainfall milestone in August. 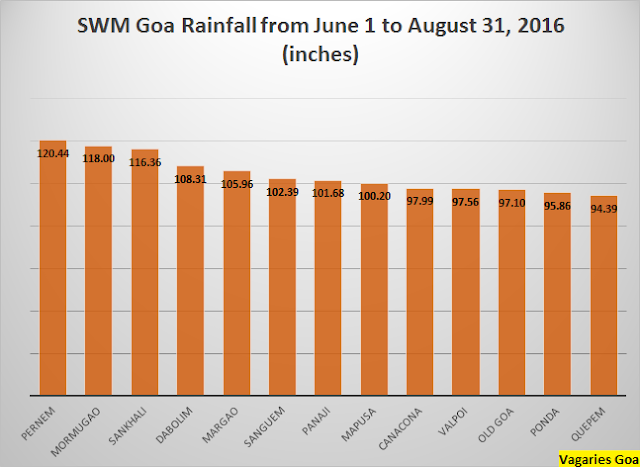 The official SW Monsoon season ends on September 30, but the rains have been seen to be continuing in Goa and S India into October in recent years.

Though La Nina has been delayed, the overall deficiency is very low and a good spell of monsoon rains in September can turn the seasonal rainfall into excess!

After a long break of 10 days, SW Monsoon has again become vigorous over Goa since August 23.

This has given the final push for the Area Weighted Average Rainfall to cross the 100 inches milestone, on August 23, 2016. 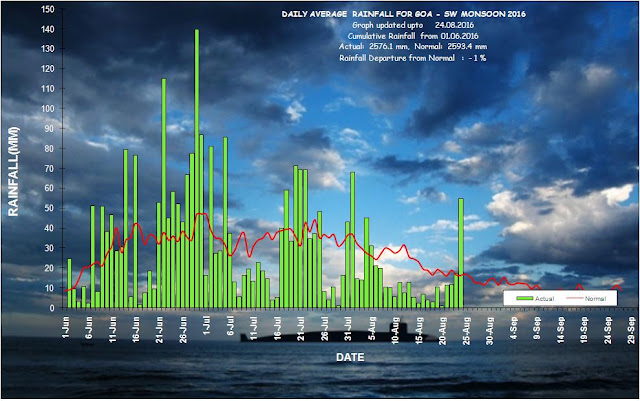 The top five wettest towns have all crossed 100 inches. 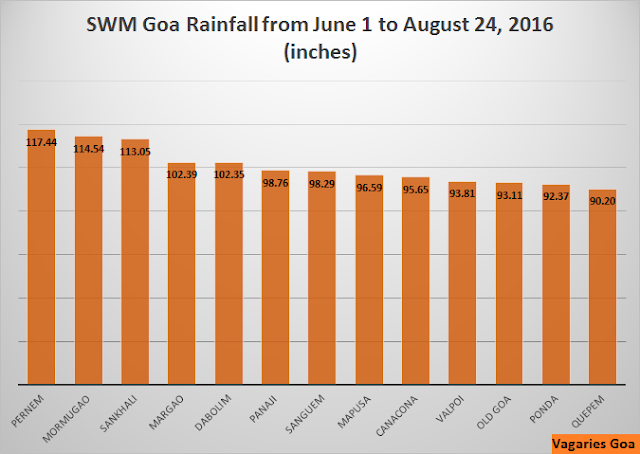 August has seen heaviest rains in the interior areas of Valpoi, Sakhali and Pernem

El Nino has turned Neutral, but La Nina is expected only in later half of the year.

The monsoon season so far has been normal over India and as of August 23, 2016, is showing a departure of just -2% from normal. 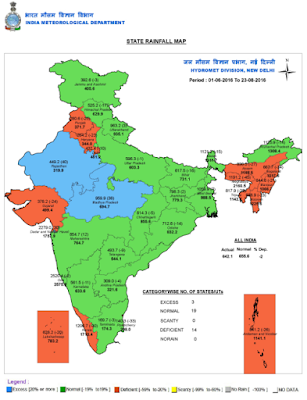 Karala, Guajarat, Punjab, Harayana, and the NE States have received below normal rainfall, while Madhya Pradesh and Rajasthan have received excess. Rainfall has been normal over rest of the states.

The rainfall is expected to remain in the normal range for the rest of the season, as per IMD forecasts.
Posted by Atul P Naik at 12:35 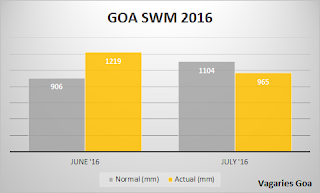 In fact there were just 9 days with above normal rainfall in July, mainly due to the shift of the monsoon axis to the far north. 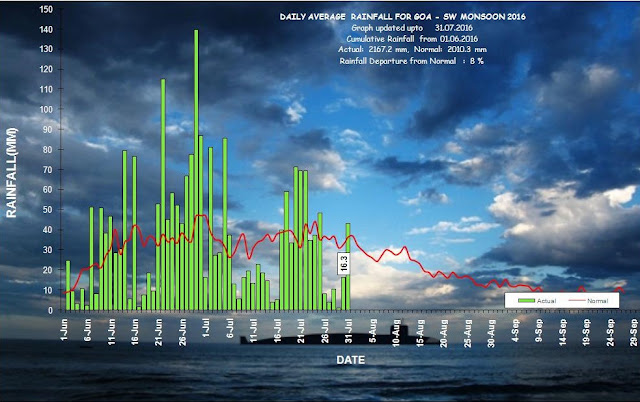 As per the records maintained by Vagaries Goa from the data published by IMD, Goa Centre, The rainfall in July 2016 is lower than that in July 2013 and 2014, but higher than in July 2015. 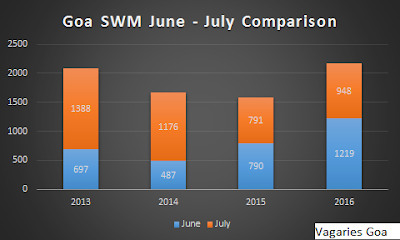 While the neighbouring coastal districts in North Konkan of Ratnagiri (1694 mm), Raigarh (1386 mm) and Sindhudurg (1255 mm) all figure in the top ten wettest districts of the country for July 2016, none of the two districts of Goa does, as per this post in the Blog Vagaries of the Weather.

The Top three wettest places in Goa in July were: 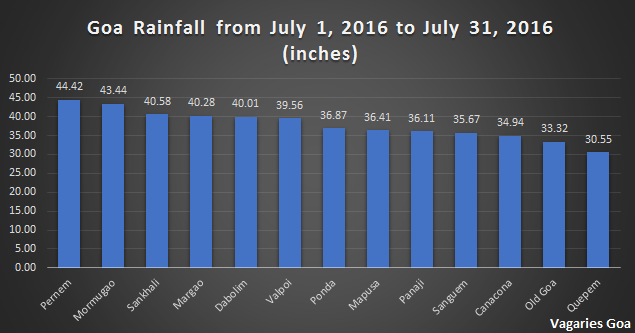 Mormugao crossed the 100 inches mark for seasonal rainfall during July. Overall for the season from June 1 till July 31, 2016, the wettest places were:

In Google Earth for geographic perspective and with rainfall in mm check this out:

India as a whole continues to have a good monsoon this year with the seasonal rainfall so far at the normal. 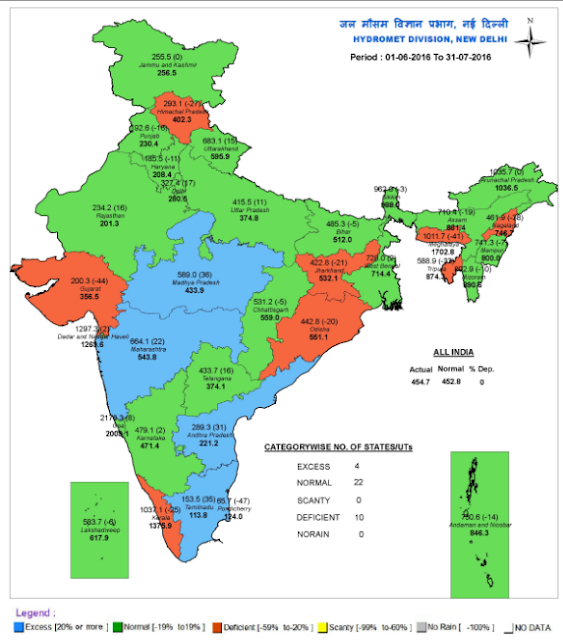 With half the monsoon season over and El Nino having ended, the rest of the season would appear to proceed in the normal path as per the latest forecast by IMD, released on August 1, 2016 and available here and extract from which is reproduced below:

We shall keep track of how the season unfolds in these very pages! Keep reading!
Posted by Atul P Naik at 20:48

Goa has been experiencing heavy to very heavy rains since Monday, under the influence of a weak trough off the coast of Goa.

Vagaries Goa rain gauge at Margao has recorded 85 mm each on Wednesday 20 and Thursday 21.

Heavy rains are expected to continue over parts of Goa over next two days. 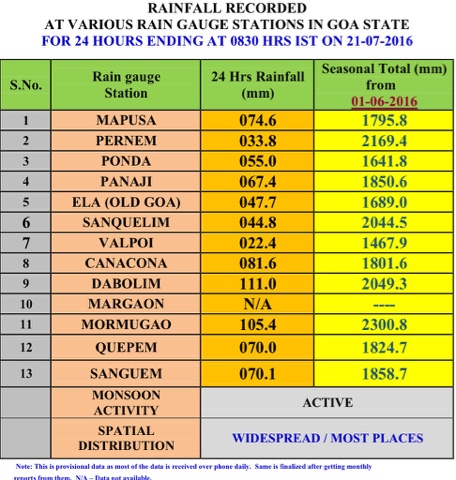 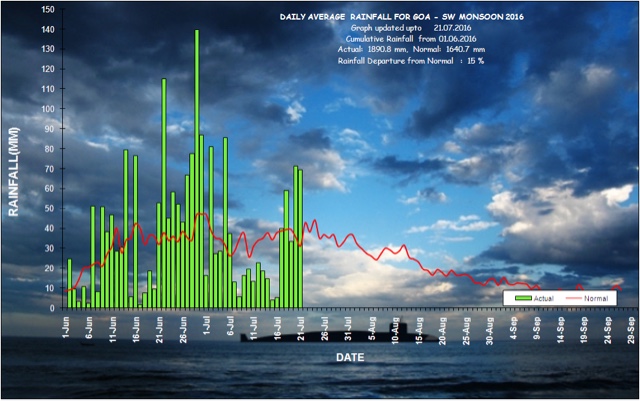 After an explosive start in June 2016, when Goa witnessed one of the wettest month of June in recent years, (read this post), monsoon has slowed down in Goa and mid July, can be definitely said to be taking a break.

Meteorologists speak of the Monsoon axis having shifted far north towards Indian Plains and the base of the the Himalayas, as being the main reason for this beak. But this situation is expected to last at most for another week, before monsoon is supposed to resume with vigor.

However due to the 35% excess rainfall received in June this year, the cumulative rainfall as measured from June 1, 2016, is still around 14% above normal! 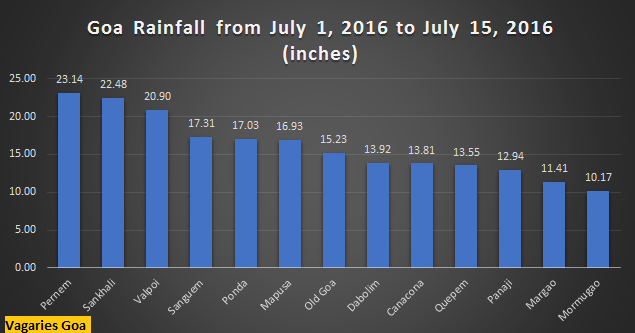 Poor rains during July first half, for the June leaders Mormugao and Dabolim, allowed Pernem and Sankhali to leapfrog over these coastal towns! 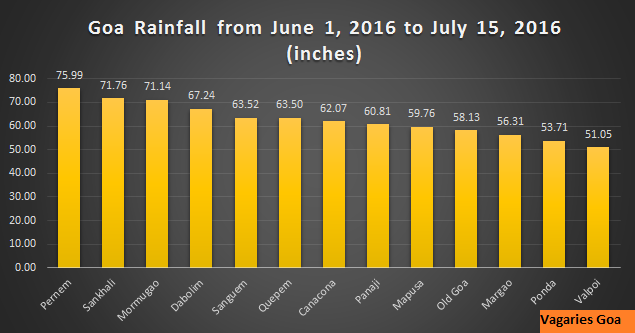 The monthly variation can be seen better in the following graph:

The monsoons have now covered the entire country. As of July 15, the rainfall was 1% above normal as whole for the country. Only Gujarat, Saurashtra, Bihar, Assam and Tripura have received deficient rains. 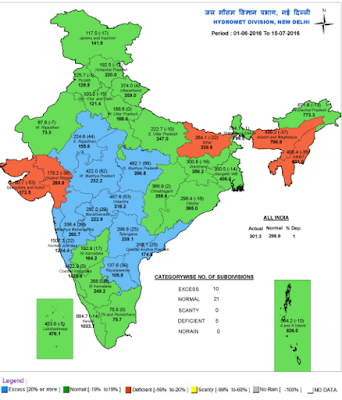 The satellite picture for July 15, 2016, too makes for happy viewing! 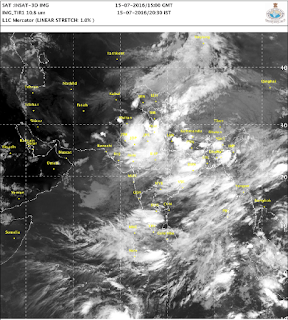 IMD has predicted that the SW Monsoons, will be good this year and the season may extend well beyond September!

Watch these pages as the drama unfolds!

Vagaries of The Weather